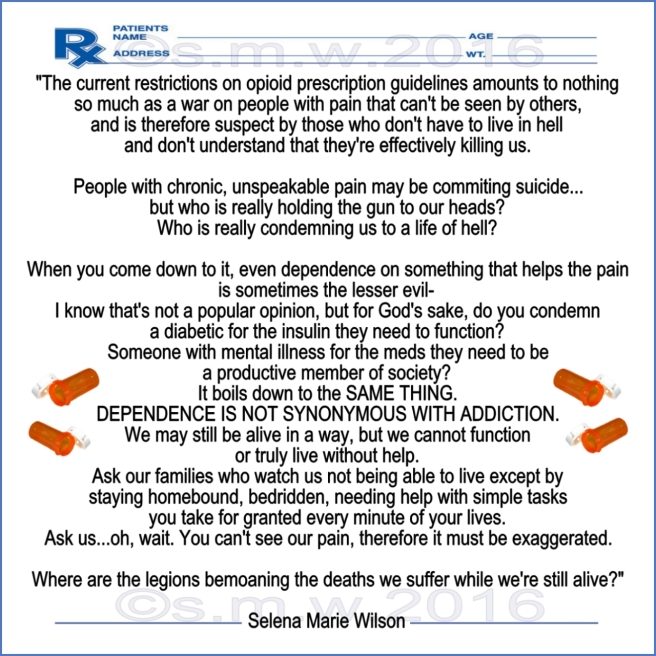 ****This post may be triggering if you are a suicide attempt survivor, suicide loss survivor, or struggle with suicidal thoughts.****

But advocates have been saying these things for three years to little avail.

Those who suffer from chronic pain are already at an increased risk of suicide. Studies have shown that chronic back pain and chronic migraine are the highest risk types of chronic pain for suicide.

The suicide risk is higher than among the general public even WITH treatment.

What has the CDC contributed to that?

The CDC’s opioid prescription guidelines released in 2016 were supposed to help prevent addiction and opioid related deaths among patients and heroin addicts. Geared toward general practicioners not as knowledgeable about chronic pain issues, the guidelines were touted as not mandatory – simply suggestions.

That has not been the reality.

Even a few months before the guidelines were enacted, there were concerns fueled by the discovery that the CDC had manipulated statistics to inflate the number of deaths per year by counting all opioid related deaths – both heroin overdoses and prescription opioid overdoses were combined under one misleading total without any explanation or breakdown. Even worse, it was not made clear that the majority of prescription related overdoses were among people who had never been prescribed opioids to begin with.
It was admitted that this was done purposely and that the CDC had disregarded the research data THAT THEY THEMSELVES had requested.
It was also admitted that the CDC had knowledge that opioid over-prescribing was NOT leading the heroin overdose epidemic.

Still, the guidelines were enacted and the faulty information was not corrected.

▪ Within a month of the guidelines being enacted, Medicare adopted them as mandatory.
▪ “Pain acceptance” was strongly suggested as a replacement for opioid therapy, with the opinion that many pain patients unrealistically expected complete pain relief from opioid therapy – an idea that has been refuted through studies…even before the guidelines were enacted.
▪ Pain management doctors – experts and specialists in pain management – who disagreed with the supposedly non mandatory guidelines and continued to prescribe as usual began to be investigated and have their offices raided by the DEA.
▪ Other doctors began cutting pain patients off opioids by drastically reducing dosage or refusing to prescribe them at all.
Some dropped all their pain patients, leaving them without any treatment at all.
Some left practice altogether, again, leaving patients with no treatment.
▪ Many doctors told their patients that the guidelines were mandatory and they could lose their licenses by not following them.
THIS IS UNTRUE.
▪ The guidelines were not supposed to affect surgical or cancer patients.
THEY HAVE.

Advocates have been speaking up since the beginning. And often our concerns have gone unaddressed and unacknowledged.

Much worse is that our fears have been justified by the number of suicides among pain patients who have been sentenced to living with unrelenting, excruciating pain.

And where are the results of these *guidelines* among addiction and overdose?

Unfortunately, the only data I can find is from the CDC, whom I no longer feel is trustworthy. But even according to them, the number of overdose deaths skyrocketed in 2017, led by illicit opioid fentanyl (purportedly more deadly than heroin- https://www.vox.com/science-and-health/2018/8/16/17698204/opioid-epidemic-overdose-deaths-2017).

2018 data is not finalized, but reportedly is very close to 2017 totals.
And in all honesty, this infuriates me even more.

Pain patients have been suffering unspeakably when opioid prescribing had already been on the decline a few years before the CDC guidelines were enacted…It’s pitted pain patients bitterly against addicts (remember, addiction is ALSO A DISEASE, and any hateful comments WILL be deleted. Continued disregard of that request will result in being banned)…and it’s been for nothing from the beginning.

The guidelines have not significantly impacted opioid overdoses. They’ve increased.

How many of those deaths were suicides or the result of desperate, suffering pain patients trying to alleviate their excruciating untreated pain?
We may never know.

But we DO know this very clearly: the CDC guidelines have caused more suffering, harm, and deaths than may ever be acknowledged, and that includes the suffering of addicts who still have not been helped.

THIS HAS TO STOP.

Published by Down The Rabbit Hole

Advocate, blogger, poet, artist, mom of 4 and Grammy of 6 awesome grandspawns and 2 generations of grandkittens, Crazy Cat Lady, Master of Selfie Taking, and Chronic Daily Migraineur with Depression, Anxiety, panic attacks, and Tardive Dyskenesia. View all posts by Down The Rabbit Hole 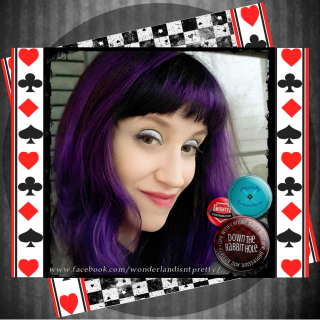 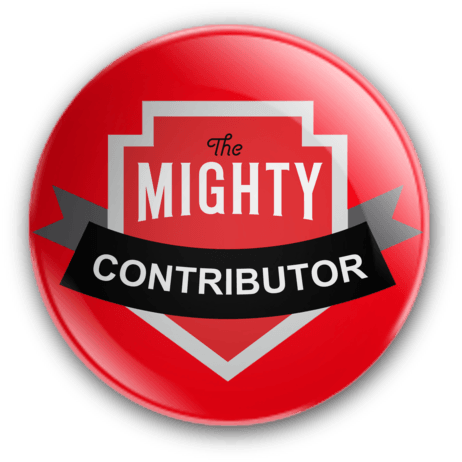